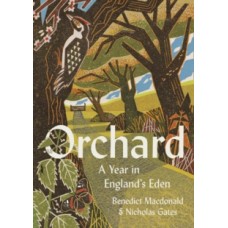 As the seasons turn, a wealth of animals and plants are revealed: Bumble and solitary bees apartment-hunting in April; spotted flycatchers migrating in May; redstarts, hedgehogs and owls nesting in June; an explosion of life in the summer and the harvest and homespun cider-making in the autumn.

And all throughout the year, the orchard’s human and animal inhabitants work together, creating one of the richest ecosystems left in Britain. Their ancient tradition of collaboration between people and nature makes orchards a source of hope for the future. If we can bring new life to England’s orchards – favouring organic methods and harvesting with a balanced ecosystem in mind – not only wildlife but people will have a far richer England to profit from in the centuries to come. New release available in store and online.