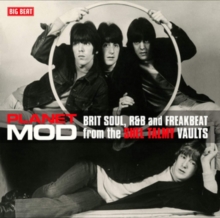 Rather than recycling the over-familiar, the new “Planet Mod” compilation digs deep into Talmy’s rarely tapped tape vault to uncover many other fabulous examples of a genre that wields considerable influence to this day. The core of 1960s modernist taste was always black America, but in recent decades the voracious appetite of genre practitioners finds not only rock, but home-grown soul and even pop squeezed within mod’s defining parameters. Certainly, several American artists are represented, including two of the acknowledged greats of US R&B. In a scenario that is all too frequent for Talmy, there is also at least one future superstar within the assembled cast. And on the other side of the coin, we have early, unsuccessful yet exciting recordings from two vocalists who would both go on to have massive UK hits in the 1970s and 1980s, albeit with essentially family-friendly fare.