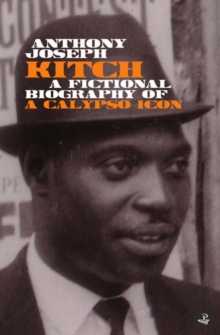 Combining factual biography with the imaginative structure and investment in the language of the novel, Anthony Joseph fully engages with the world he recreates, and by presenting a multifaceted view from Kitch’s friends, rivals and even enemies, he gets to the heart of the man behind the music and the myth, reaching behind the sobriquet to present a holistic portrait of the calypso icon Lord Kitchener.

Born into colonial Trinidad in 1922 as Aldwyn Roberts, ‘Kitch’ emerged in the 1950s, at the forefront of multicultural Britain, acting as an intermediary between the growing Caribbean community, the islands they had left behind, and the often hostile conditions of life in post-war Britain. In the process, Kitch, as he was affectionally called, single-handedly popularised the calypso in Britain, with recordings such as ‘London is the Place for Me’, ‘The Underground Train’ and ‘Ghana’. Joseph spoke to Lord Kitchener just once, in 1984, when he found the calypso icon standing alone for a moment in Queen’s Park Savannah, one Carnival Monday afternoon. It was a pivotal meeting in which the great calypsonian outlined his musical vision, an event which forms a moving epilogue to Kitch, Joseph’s unique biography of the Grandmaster.