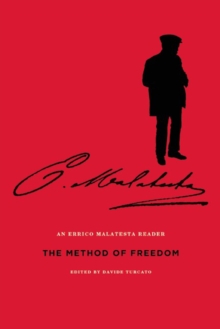 “Capitalism is the same everywhere. In order to survive and prosper it needs a permanent situation of partial scarcity: it needs it to maintain its prices and to create hungry masses to work under any conditions.”

The most distinctive and universal anarchist principle is the principle of coherence between ends and means: human emancipation cannot be achieved by authoritarian means. However, the same principle could also be read in the opposite direction: our ends should not be disconnected from our action; our ideals should not be so lofty as to make no difference to what we do here and now. The anarchist whose deeds and words have best illustrated both sides of that principle—the “idealist” and the “pragmatist”—is Errico Malatesta. Never one to divorce thought from action, or retreat into dogmatism, his life and ideals remain an inspiration the world over. The Method of Freedom is the first collection to capture the full range of Malatesta’s thought over sixty years as an anarchist propagandist.