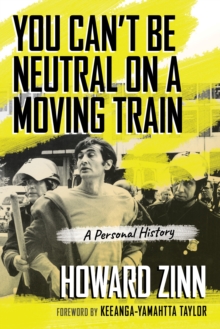 He attended Columbia University, received a doctorate in history in 1956, and became head of the history department at Spelman College, an African-American women’s school in Atlanta. Zinn’s experiences at Spelman radicalized him. A third of this text is devoted to reminiscences about the civil rights struggle in the South. His account is one of ordinary individuals taking small steps to battle racial injustice — integrating the Atlanta library system, sitting in with African-American students at lunch counters as a challenge to Jim Crow statutes, organizing Freedom Rides in Albany, Ga., and voter registration in Selma, Ala., in defiance of racist local governments and often pusillanimous federal authorities. Fired from the traditional Spelman for being too controversial, Zinn came to Boston University, where he opposed the Vietnam War. He describes his outspoken opposition to the war and his trip to Hanoi to repatriate liberated American prisoners. Finally, in a scattershot group of essays, he discusses his civil disobedience, his conflicts with the conservative Boston University administration, and his hope for a more decent society, brought about by ordinary people.